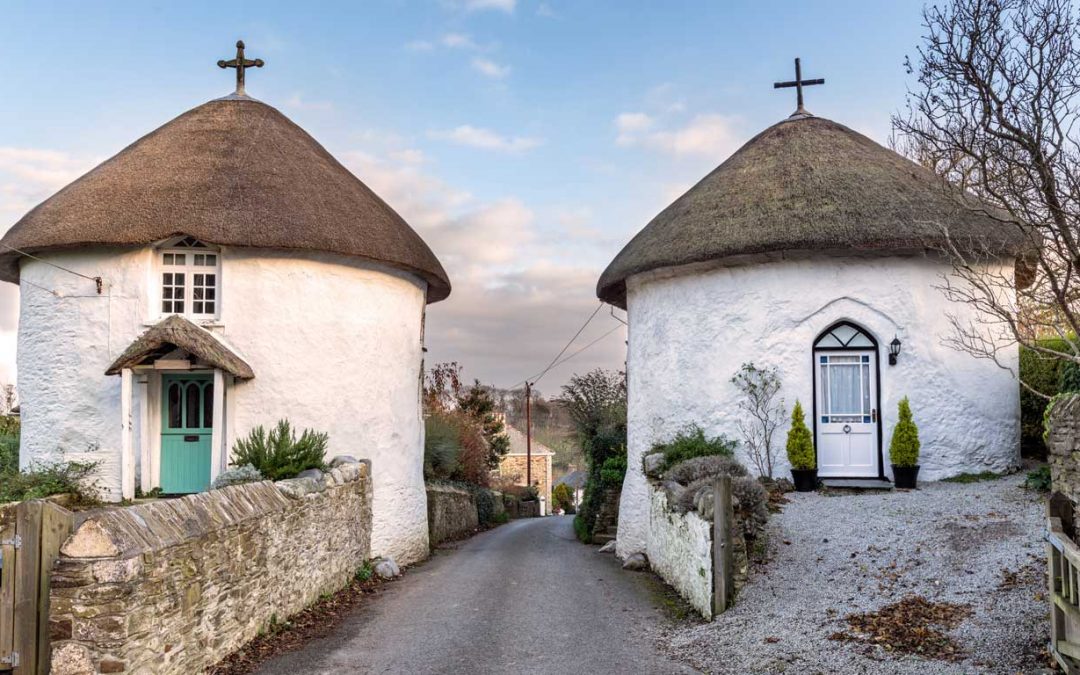 Veryan has been described as one of the loveliest inland Cornish villages. The Poet Laureate John Betjeman even felt it was “a mild tropic paradise”. If we ignore cars, the first impression is indeed that of a rural idyll from another time. First mentioned in The Doomsday Book in 1086 as “the manor of Elerchi” (Cornish for swan), the village and parish of Veryan got its present name from the parish saint St Symphorian. The name was first corrupted to St Severian and this was then shortened to Veryan. The core of the village, otherwise known as Veryan Churchtown, consists of a quaint pub, a charming post office and village shop, a school, and white cottages clustered around a venerable church.

The Church of St Symphorian

The squat Norman architecture of the parish church is the dominant landmark of the village. Unusually for Cornwall, there is no evidence of a church existing in the location before the Norman times. However, some may argue that a Celtic cross shaft near the war memorial may be a relic of an earlier structure. The present-day church dates from the 13th century and was renovated in the middle of the 19th century. Its venerable exterior and interior, the surrounding charming cemetery and the adjacent tranquil pond are perfect for a quiet wander and a ponder before setting off to explore the village’s round houses.

Veryan’s main attraction and the reason why many decide to visit the village are five round houses built between 1815 and 1818 by the local vicar Jeremiah Trist for his daughters. Four of the round houses are thatched and all of them are topped with a stone cross to deter the devil from entering the village. Two of the roundhouses are located at the entrance to the village at Veryan Green, another pair at the entrance on the Pendower road and the fifth, with a slate roof, is behind the school. It is said that they are round because the devil has nowhere to hide in a round house.

Vicar Trist was also instrumental in adding several other buildings to the village, including a school for boys that stood in the location of the present-day school, and a school of industry for girls, now a thatched house behind the New Inn.

The New Inn and other eateries

The New Inn is a typical Cornish country pub. Its quirky, friendly interior welcomes you with open arms. The food is tasty, satisfying pub grub and there are several beers and ciders on tap. Should you want to visit with your canine BF, the pub is dog friendly. The New Inn is open all year round and serves decent Sunday roast.

Open only in summer months, the Elerkey Gallery & Gifts across the road serves light lunches and cream tea from 12 to 5.30 in its coffee shop. However, if you’re looking for something different, you may want to venture a mile out of the village to Melinsey Mill.

The 16th-century, fully restored Melinsey Mill is now an arts and crafts gallery, a water mill museum and a popular restaurant. Open from April to October, it is nestled in a secluded valley on the St Mawes road only a mile out of Veryan. The admission to the museum and gallery is free. The gallery sells the work of its resident artist and local craftsmen, including wood and willow furniture and baskets, textiles, Cornish fairies, paintings, sculptures and painted boxes. The restaurant serves lunches and cream tea, as well as holds popular pizza and grill nights.

There is ample outdoors seating by the pond, some of it sheltered, and seating in the mill when the weather doesn’t play ball.

However, if the weather is nice, you might want to explore some of the ancient sites in the immediate vicinity of Veryan. Carne Beacon is a Bronze Age burial mound a mile out of Veryan Churchtown. It is reputedly the burial place of Geraint, the legendary 6th century king of Dumnonia. According to folk lore, Geraint’s main fort was on the opposite side of Gerrans Bay at Dingerein Castle.

Both the bay and the nearby village of Gerrans are named after the legendary king who is said to be the father of St Just. Geraint was reputedly buried in a golden boat; however archaeological excavations revealed no such treasure. The mound itself is well preserved. It is the largest surviving Bronze Age burial mound in Cornwall and one of the largest in the country. It contains several secondary cremation burials in addition to the main stone cairn containing ashes and charcoal.

Not far from here is Veryan Castle, a small Iron Age hill fort. Both the mound and the hill fort are on private land. They can be seen from footpaths running along the edges of the fields surrounding them. Carne Beacon is one of the highest peaks on Roseland with stunning views of Gerrans Bay that beckons to be explored on foot.

From Veryan Churchtown you can choose from numerous walks to Carne Beacon and Veryan Castle (1 mile), Nare Head and Veryan Bunkers (1.8 miles), and Carne and Pendower Beaches (1.4 miles). You can also take in all of these sites by venturing on a slightly more challenging circular Nare Walk that runs for 5.7 miles on the South West Coast Path and inland footpaths.

Fal River Cottage is a perfect base for day trips to Roseland, its stunning beaches and quaint villages. Its location on the confluence of the rivers Truro and Tresillian means that the cottage overlooks Roseland on the opposite riverbank. The best way to access Roseland is on A390 through Tresillian and Tregony. A longer although more exciting route is via King Harry Ferry at Trelissick.